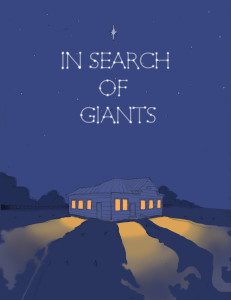 In Search of Giants comes to Sandwich, Ontario. Graphic Design by www.onlyhuman.space

In Search of Giants

(Drama, Song and the Spoken Word)

Toronto artist, producer and mezzo-soprano, Ali Garrison, has teamed up with her American colleague, Dr. Von H. Washington, Sr., a renowned theatre professional for forty years, to bring their well-received theatre presentation, In Search of Giants to Windsor, Ontario for Culture Days.

This production, about a personal journey leading to the discovery of  three significant leaders on the Underground Railroad, has been playing to full houses and standing ovations since it began touring Michigan in November 2015. There have been numerous transnational performances since, along Michigan and Ontario Underground Railroad routes, including Schoolcraft, Kalamazoo, Albion, Ypsilanti, Ann Arbor and Toronto. Next on its Freedom-Seeking Tour, In Search of Giants comes to Culture Days in Old Sandwich Town (now part of Windsor), Ontario, at the old courthouse, MacKenzie Hall Cultural Centre on October 1st, 2016. This important village along the Detroit River was where so many refugees from slavery settled, including one of our most significant Giants, the great Abolitionist, Henry Bibb.

In Search of Giants is a staged dramatic reading in the traditional style of the Afrikan Griot, but uses more than one storyteller. This presentation features an international cast of modern-day American and Canadian storytellers. Among them are Washington and Garrison, with Von Washington, Jr., Bianca Washington, Duff MacDonald. Alicia Payne, Tim Smith and accomplished professional baritone Romeo Phillips. Musicians, Kwanza Msingwana and Darryl Huggins will open the evening.

Garrison, who in this production sings and plays both herself and her own great, great, great grandmother,  shares these thoughts: “In Search of Giants is a powerful and moving piece about how when we explore the past, we understand ourselves better, which inspires a more informed future. I spent last year researching with Dr. Washington, digging deep into ancestral roots. There, we found a wellspring of Abolitionist history with narratives of my three greats grandparents, Dr. Nathan Thomas and Freedom Seeker Henry Bibb. To be able to bring these explorations to Old Sandwich Town, where so much of this transnational history continued to play out, is thrilling.”

In an informational release Washington writes, “As an African American, I learned a long time ago that I had to find my own history because those who enslaved my ancestors were set on keeping the descendants of the enslaved ignorant of their past. However I also learned that, if I didn’t know, neither did they. I have made it my duty to help us all learn about the true Giants of our African, American, and Canadian past.”

In a perpetual search for information about his ancestral past, a local college professor makes several unannounced visits to the Underground Railroad Museum in Schoolcraft, Michigan. His first visit, revealing and mysterious, brings him closer to understanding the struggles of the conductor of the house, Dr. Nathan Thomas, a Quaker by birthright. In an unrelated meeting, the Professor comes into contact with a descendant of the Thomas family and learns more about Dr. Thomas’ wife, Pamela, and the Freedom Seeker and fellow Abolitionist, Henry Bibb, who visited the Thomas house in 1844 and went on to settle in Canada.  Doc also learns about a conjuring technique and a narrative story that was written by Bibb himself before his death in 1854. During a second visit to the museum, the professor goes to the room where hundreds of enslaved ancestors were hidden while waiting to go on to freedom; and there, to his surprise, he successfully conjures the spirits of Henry Bibb and others who join in to aid him in telling their stories of running toward freedom on the Underground Railroad.