WHEN GOD WAS A WOMAN: IMPROVISATIONS WITH NANCY

I had one particular 48 hours in my last week Downeast when I finally understood why that mysterious voice called me to jump through hoops of fire to make this rather long, arduous trip. For the life of me, I couldn’t quite figure out where such a overpoweringly strong compulsion to go to Maine this year came from. It seemed so much more urgent than my usual desire to go commune with Mama Nature and my dear friends in that area. But being a musician, teacher AND an improviser, I’ve grown accustomed to obeying and submitting to intuition and the nudges of the muse. After a while, we learn not to waste time questioning those indicators, methinks. Just follow it and see what strange events unfold…and hope to hell that we have enough accumulated acumen to deal with the ensuing experiences.

Nancy Bennett, an extraordinary improvising pianist in her late 70s (think an intuitive, feminine version of Keith Jarrett and Bill Evans), who I’ve known for many years musically and otherwise, and I, had an exquisite duet improv session (caught on a Zoom recorder for posterity) on the Steinway at her wharf in Cutler. 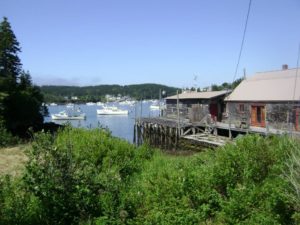 It was really more like a series of musical intuitions/conversations.

Nancy’s musings are always harmonious and completely approachable, while containing enough of the unpredictable to keep one from making assumptions. We had driven out to her wharf in Cutler, which is practically at the edge of the earth, a classic, quaint safe harbour with fishing boats, seaweed and seagulls. Everything was softened by the damp and the fog that hung over the village.

She and I have often improvised together in the context of larger ensembles over the past 18 years. In fact, it was she who first introduced me to the wonderful improvisers in the Downeast area. We had invited a few of our partners in crime from the notorious, intrepid Les Trois Etoiles, out for an impromptu, intimate improv session at her place. George, a friend of hers, had brought the zoom recorder to try to make a decent field recording of our afternoon.  We waited for the others to show, except that they couldn’t or didn’t. So we decided to do a series of duets instead. She has a beautiful old Steinway in a large room that used to be the freezer where they stored all the fish! She hardly ever needs to tune the piano because it keeps perfectly moist, living like that, directly over the water. It has a rich, mellow tone. I love pianos that have distinct personalities. Delightful to sing with its salt-soaked sonorousness.

We embarked on our first warmup co-composition, feeling out how best to balance, given our lack of a proper setup with vocal and piano mics. It became immediately apparent to both of us and to George, the friend who was recording, that we had stumbled upon a very special collaboration. We laughed and decided to call the session “When God Was a Woman”, the title of one of the books that George was using to prop up the recorder.

Nancy and I have a natural, easy personal rapport which translates fluently to the improvising. We were co-composing, conversing melodically and harmonically, listening carefully, trading ideas back and forth, weaving a rich tapestry of progressions in the moment. We both seem to go into an altered state and after each piece, it felt like we were returning from far off other worlds that we had visited, not separately, but together.

By the third piece, we had started to hit our stride and I decided I needed to bring in words. I walked over to Nancy’s bookshelves and scanned the titles. My eyes lit on one and I pulled it out. It was an anthology of Chinese poetry, translated into English, with delicate, elegant illustrations. I leafed through it looking for something summerish while Nancy introduced her next theme. Then I joined her using the text that I chose. It’s called Through Summer Rain (see the Soundcloud link to the complete set of three improvisations. Do listen with headphones and watch the levels…it’s a fairly simple field recording and of course, carries all the perfectly imperfect wonders of a single-take performance)

“Through morning rain come cries of flower vendors in the lane;

Dew on the petals; mushrooms by the trees;

Along the doorstep, moss.

A tiny snail is creeping up the wall,

When we had finished the song we looked at each other in mutual astonishment. What had we just discovered? As it does in conventional composition, using poetry is a way of bringing more meaning and symbol into the melodic explorations and solidifying the phrase structures.

Eager to explore more, I randomly pulled another book, this time Gibran’s The Prophet, parts of which I know very well. Without looking I opened to a page. There lay the following words:

“What we long for and cannot attain, is dearer than what we have already attained.”

What unfolded in this take was pure spontaneous inspiration.

I decided then and there that I must bring Nancy up to Toronto to play with me on my next concert (which will be May 2014 at Gallery 345). The name of the concert I had ALREADY decided earlier this summer will be “Longing & Belonging”. How’s THAT for synchronicity?

The third piece you’ll hear, really has beautiful, organic form. It came from a book on English Gardening. I blindly picked a poem by Vita Sackville-West (lover and member of Woolf’s Bloomsbury Group and supposedly the inspiration for her Orlando).

“She walks among the loveliness she made,Between the apple-blossom and the water

She walks among the patterned pied brocade,

Each flower her son, and every tree her daughter.”

I hope that you will find as much pure pleasure and awe listening to these spontaneous utterances (now suspended in time) as we did creating them. It startles me, how much structure they have for being spun in a stream of consciousness state. I suppose that after a lifetime of making and absorbing music, these things become instinctive. I have had them transcribed now to bring them into the canon of rare vocal literature co-composed via improvisation.